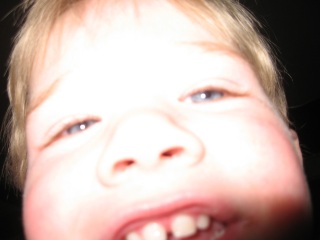 #1:
The baby broke my digital camera.  Ugh!  A few days before he broke it, he took these photos of himself.  They are very cute and he is in his ‘Uperman’ shirt.  He loves it so much I can hardly get it off of him to wash it.  He wore it for about a week the first time, even to bed, under his PJ’s.  He hasn’t ever seen the movie or anything that would teach him about it.  I just thought it was hilarious!  Also, on my phone, I have a photo of me and him as the wallpaper.  He saw the photo and said “Mom.”  Then I pointed to his photo and said, ‘Who is that?’  I couldn’t see his face, but I am sure there was a grin as he said, “Uperman!”  I laughed and laughed….so funny.  But I am so very sad that my camera is broken because I cannot afford to replace it….so there won’t be any photos of things here at home for a while.

#2:
I wanted to show you photos of my new bathroom!!!  It is almost completely finished…just a little touch-up paint, hooking the water up to the sink and the shower and hanging the towel bars!!!  Then I remembered the camera is broken!  Ugh!  So no photos.  But I did purchase this shower curtain:

which looks awesome with the key lime paint and dark brown cabinets!  I cannot wait to have it functional!!

#3:
There are riots in Rio de Janario!  Ugh!  Our #3 missionary is scheduled to depart to there at the beginning of July.  My keeping up with the news husband informed me and left cnn web pages of the riots up on the computer this morning so I could see them.  I am glad he is still at the MTC in Provo for a little while longer.  But with the reasons for the riots, reported as the government spending billions on new stadiums for the hosting of the World Cup next year and raising bus fares and not having adequate education or hospitals, I don’t imagine they are going to die down anytime soon–as we are all feeling the economic squeeze. 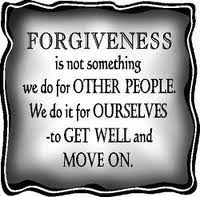 #4:
I had a few more Ms. P incidents this week.  I cried.  I am so tired of them.  This whole understanding my feelings and feeling them in the moment thing stinks.  I liked it much better when I just buried them inside and pretended that they didn’t bother me.  Sometimes now my feelings get hurt and I am just kind of non-functional for a time and don’t know how to get past it.  How do you people live like this??!!  I am so busy and so focused.  Last month, an hour before a monthly meeting held at my house, my feelings got so hurt that 1/2 an hour before the meeting I just cancelled the entire meeting because I didn’t think I could manage hosting the event in light of my emotional state.  Yesterday, it happened again.  Really???!!!  An hour before the meeting when I have about an hour’s worth of preparations to do?  I tried doing the preparations anyway, but I couldn’t focus.  I went upstairs and cried and prayed and was just totally frustrated.  But this month I did not cancel the meeting.  I managed to pull it together.  But I still have not processes the feelings and my thoughts about them and how I want to handle that situation.  It is not a Ms. P situation so it requires a little more delicacy.  Ugh!  I hate allowing my feelings to be hurt!  That would probably explain my attitude toward those girly girls who are so into their feelings and emotions.  They drive me crazy.  It is apparently because I am one and I see it as a weakness not a strength.  Sometimes being a psychology person when you have plenty of your own emotional baggage to manage is exhausting! Ugh! 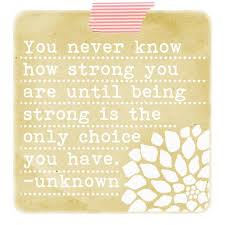 #5:
Have you ever noticed when you have some big spiritual milestone coming up the world at your house seems to fall apart??  I have noticed this phenomenon over and over and over again.  Some people have it happen right before a big event, some people have it happen right after a big event.  I think it is Lucifer’s way of trying to keep us from doing important spiritual work or to make us doubt that what we did do is important and significant.  I have learned (since mine happens before the event) just to put my head down and keep going.  Things will work out and be OK.  Because of the emotional stress we have been having here at my house, we must be heading for several major spiritual events.  It has been horrible!  Everyone seems to have an attitude, about everything.  Issues in our marital relationship are coming to the surface.  I’m super emotional and getting my feelings hurt all the time…ugly.  We did get our missionary off.  Another (Tammy) leaves in about a month.  Then a week later Spanky comes home, and about a month after that we are sending the college boys back to school.  It doesn’t seem like that schedule should warrant the stress we have been experiencing.  Something else must be on the horizon.  I wonder what that is?  Anyway, keep us in your prayers, I’m sure we can use it 🙂

I hope your week is going better than ours!  Have a great day!

← Lessons Learned from the Saga
Thoughts about sacred things. →