Saturday, after Drew and Spanky left to drive to LA (picking up Sport and Speedy who attended EFY), I was tackling some home improvement and decorating projects.  I needed a picture frame—a specific size, almost square, between 21 and 27 inches.  I decided to hit the thrift store.

Because Slim was sleeping (he has been sick), and Sun, Shorty, and Smiley were watching a movie, I decided to take Spike, Spike with me.  (At 6 that morning, Drew brought him to me while I was in bed, explaining that as they got into the car to drive away, Drew had forgotten something.  On his return into the house, he met Spike, Spike heading out of the house—looking for his dad and mom.  He would have been outside by himself, unable to get back into the house, with all of us asleep, unaware there was any problem.  Lovely little escape artist.)

The thrift store was dirty and usually busy on a Saturday.  “I will just put him into the stroller.  He will be safer with me than if I leave him home,” I reasoned.  Besides, even if it wasn’t as convenient for me, he would enjoy the time out.

We got to the thrift store.  It was busy.  I parked the car, opened the trunk, pulled out the stroller.  I couldn’t open it.  Something was wrong.  It was stuck.  I messed with it for five minutes.  Nothing.  I couldn’t figure it out.  I decided to forget the stroller and just carry the baby.  After all, I only wanted a frame.

I went inside and walked over to the frames.  Spike, Spike was content to sit on my hip as I browsed.  But when I pulled out the measuring tape to verify sizes, he was done.  He wanted down.  He wanted to try out the pink toddler bed across the aisle.  OK…….sure.  I made my purchasing decision simultaneously keeping Spike, Spike in my view.

As he was preparing to stand and jump on the bed, (Mothers of boys know when something like this is going to happen.  Its an internal sensing thing.  We can feel it.) I scooped him up and noticed the VHS cassette tapes.  I wonder if they have any Blue’s Clues?

I found four, at $.49 each!!!!  Two of them are ones I wanted to purchase new.  You know I bought them!  We had to wait in a long line, which was frustrating trying to juggle a wiggly toddler, four cassette tapes and a frame.  Then when we got to the car, Spike, Spike refused to get into his car seat.  Seven to ten minutes arguing with a two-year-old why you have to sit in this car seat.  Oh, I love those days!!!  But we arrived home, put on Blue’s Clues and finished the project, only taking a break to make dinner.

Sunday morning was its usual frustration.  Our littlest man, for the last six to eight weeks, has decided he doesn’t like to wear church clothes.  The first three weeks, he fought to put on any pants, except his pajama ones.  The last several weeks, he has refused to wear any shirt.  This Sunday was a little different.  After a bit of negotiation, he put on his pants and then his shirt without a fuss.  (He was distracted by Blue’s Clues.)  Then when he realized which shirt it was, he screamed and screamed, “Help! Help! Help!” as he pulled at the buttons and the neck.  I wouldn’t take it off until he agreed to wear a different one.  I helped him change and order was restored.  We actually arrived at church on time.

After church was fairly uneventful.  We had favorite foods for lunch and dinner (bean soup and pizza), so there was very little complaint and the baby (toddler) even took a nap which allowed me an hour’s worth of quiet time and scripture study.  After dinner the children played outside, we tidied up the house, read scriptures and prayed, brushed our teeth, put on jammies, and sent the little ones to bed.

Slim and I sat down to watch a pilot episode of a new series—about the murder of an 11 year-old boy in a small town.  We were near the end of the episode when the phone call came in from one of my husband’s counselors.  Was the Bishop home?  When was he expected?  Could he get a hold of him?  Sure.  I relayed the necessary information.

Then he told me why.

That evening, he had been reading the paper.  As he read the story, he recognized the people.  A 19-year-old young woman and her 21-year-old boyfriend had been cooking drugs in their apartment and there was an explosion.  They had been released from the hospital with 1st and 2nd degree burns on their hands and arms.  Their two-year-old however, had been flown to a larger hospital with 1st and 2nd degree burns on his face, front, back, arms, and legs.  The parents were incarcerated pending child endangerment charges.

The mother was one of my inactive young women when I was the Young Women’s President.  She and I were in the hospital at the same time delivering our babies.  She brought hers over to see me.  I held him and played with his thick, dark hair.

As I recalled those days, I thought about these days.  Was he covered in burn bandages? Did they have him medically sedated to keep his pain away?  He didn’t have any idea where he was, what was happening to him or why, and where were his parents?  Who was going to be there for him when he woke up?  Who is going to comfort him?  What will happen to him when he is released from the hospital and where will he go?  He is just TWO!  He is just a baby!  Like my baby………  His suffering is due to no fault of his own.  My heart hurts for him and worries for him.

I remember those Newborn Intensive Care Unit (NICU) days with Slim and the ones in Pediatric ICU.  We were in the NICU for a month.  I was there every day, all day long watching over my little man.  There were other bassinets, where fights for life were happening, alone, with only the hospital staff around.  I did not try to be judgmental, but I did wonder—–where are their people, specifically, where are their parents?  They were never meant to do this alone.  My heart hurt for them also.

Last night, at 3 a.m., when Spike, Spike came up the stairs, I pulled down the covers and welcomed him into the bed.  I snuggled him—close.  I didn’t even care when I woke up at 5 because his elbow was in my back and he kept trying to sleep on top of me.  I was just glad he was mine and he was home and he was safe.  This morning, we ate waffles and smoothies, watched Blue’s Clues, and built forts.  It’s 11 and we are still in our pajamas and I don’t care.  We might stay that way all day.  (I might even let Spike, Spike wear them to church on Sunday…..)  But we are safe and warm and happy and fed and loved, the way God intended us to be.  When my big ones get home, I’m going to spoil them too and tell them how glad I am they are mine.

Love your little ones every day and hold them close.  You never know what tomorrow may bring.  My prayers are with you little friend, and with your parents, regardless of some of their choices. 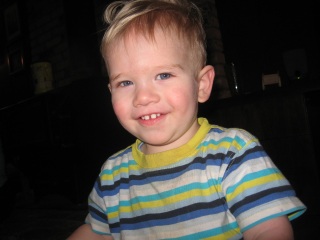