My trip to Virginia was amazing!  It was beautiful!  I love that area—so gorgeous!  Of course, all of the two times I have been there have been in May, so what can you expect?

It was such a rewarding experience to watch my first son graduate from college—especially this son—the one who didn’t want to learn to read, and decided as a first grader that he just was never going to do it.  Oy!  That was awful!   Because Slim was my first reading student, I decided that if it was this difficult to teach kids to read, no one at my house would be reading.  It was not that difficult to teach kids to read.  It was that difficult to teach SLIM to read—very different things.  And what did the man graduate in?  English Literature, with creative writing and philosophy minors.  The man reads a……l……..l…… …….t…..h…….e………….t…….i…….m……e!

The flights over I spoke with Gary from Australia, who was on his way to Indiana to visit his in-laws, has seven sons and plays the trumpet!  We had a really fun conversation about boys, the crazy things they do growing up, and then he showed me his ‘traveling trumpet’ that was the only carry-on luggage he had.  It was so fun and so cute!  My final flight into Virginia landed in Roanoke at 10:30 p.m.  There was a couple there who, while waiting for their carry-on luggage, were holding their sleeping sons, probably about 3 and 4, so their arms were totally full!  I decided to ask them if they needed help.  They politely told me that they didn’t speak English.  I asked what language did they speak?  Portuguese!  I told them my son who was meeting me at the airport speaks Portuguese!  Then I followed them to baggage claim and took their carry-on luggage.  When I got down the stairs, there was Spanky.  I hugged him, told him I needed his brother and sent him back to the car to wait and send in Slim.  Slim came in and immediately started chatting away in Portuguese.  I offered to hold one of the boys while the father went and got their 3 giant suitcases and the stroller, all the while Slim spoke with the wife.  Then we helped them get their sleeping boys and luggage to their rental car.  And to boot, they are both lawyers.  It was sweet and they were very grateful for the help.

Wednesday I spent all day running around on campus and meeting all of Slim’s friends and professors, with Drew’s dad and Spanky.  It was really fun and they all adored our son.  Of course, I will not remember any of their names, but that’s OK.  Wednesday evening, they held a banquet for the Seniors.  It was nice to have the Seniors recognized for their accomplishments.  The highlight of the evening however, was that we were two table away from Southern Virginia’s commencement speaker for graduation, Sister Elaine S. Daulton.  She has been one of my personal heroines for as long as I can remember!  I have loved every speech I have heard her give!  She served as the General Young Women’s President from 2008 to 2013.  Before that, she was the counselor to Sister Tanner from 2002 to 2008.

Typically, I do not approach the general leadership of the church when they are anywhere around.  This has been my practice mostly because I know they meet with thousands and thousands of people and I do not want to add to their weight.  But with Spanky’s encouragement, I went forward.  I thanked her and her husband for their service and sacrifices to the work.  And guess what?  We even got a photo:

Sister Daulton also participated on BYU’s folk dance team, which Spanky currently performs with, so there was this one:

That was definitely the highlight of the trip for me.

Thursday was graduation.  Slim was more than ready.  Graduation was held just outside of Main Hall.  Spanky was there early enough that we got really good seats, though we weren’t in the shade, so I got sunburned.  It was a beautiful ceremony, a little long though.  Sister Daulton’s address was amazing and once again I took notes, as tears streamed down my face, the Spirit acknowledging to me the truth of what she was saying.

Slim cried as the honor choir sung their final number, Shenandoah, with the current, graduating, and former choir members. 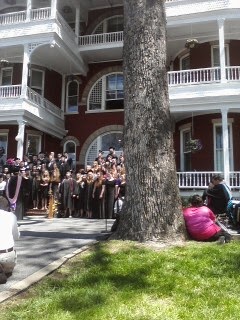 Don’t you just love that tree?  I sat right behind it.  However, I could see the speakers as long as someone wasn’t standing to the left of the tree trying to get a photo of the speaker.  After graduation, we had a little meet and greet on the back lawn with tons of yummy food.  Then we went out to lunch because Slim and Dad didn’t eat at the meet and greet, but Spanky and I did.  Oy!

Thursday evening we went to Monticello, the famous home of Thomas Jefferson.  We got there too late for a tour of the house, but did manage to walk around the grounds.  It was beautiful and really neat to walk around a home built during that time period and see how they lived and worked and stored things.  As we got back into town, we were starving.  We found where we wanted to go on the GPS and headed over there.  When we arrived, the restaurant had closed.  It would have been nice if that had been on the GPS.  We walked around town and found a place to eat.  Who happened to be there?  Why, President Sybrowsky and his wife, Brother and Sister Daulton, and another couple (I’m thinking it was the Knights, who are the benefactors of the University, but I’m not sure).  We let them enjoy their meal and we didn’t interrupt them.

Friday morning we packed it up, drove to the airport.  As we pulled up to the curb, Brother and Sister Daulton were just leaving their automobile to head into the airport.  I kind of felt like we were stalking them without trying to do so.  Weird.  Then as we went through security, the Daultons were right behind us, again.

The flights home were uneventful, but long. Well, with the one exception that as I was waiting to board my flight in DC, I turned around and saw Mitt Romney sitting on the chairs behind me.  I left my luggage in line, and went to thank him for running for office last year.  I was obviously bothering him, so that was all I said, and no photo.  But I shook his hand.