Woohoo!!!  I have wanted a scanner for quite a while, just because we have photos that I have no other copies of other than the original print.  Like this one:

This is the only photo I have of my father’s parents, Melvin Cleo (Bill) and Dorothy Rosella Bryant.   (The little people are my brother David [baby] and me.)  Don’t you just love the green paper on the ends??!!  And the tapestry on the wall—I think my mother still has that.

But I am so excited to upload some of these photos on Family Tree!!!

In fact, in researching some of my ancestry and evaluating some genealogy my mother sent me, I learned that her side of the family, in fact, is descended from the Chief of the Wampanoag Federation of Indians, Massassoit.  He is THE Indian who had the first Thanksgiving with the Pilgrims.  Oh!  Ya!  That Indian!  There is a statue of him: 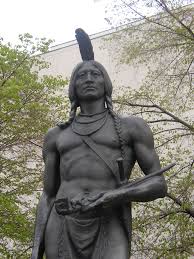 See the resemblance?!!
Nope?  Me either!  Oh well!
I think he is actually the Indian on BYU’s campus!  Maybe?  Maybe next time I am there I am going to have to have a photo with that statue!!  So cool!  Anyway, even cooler than that, one of the women who just moved into my ward is also a descendant of Massassoit!  We can trace both of our lines back to him and we can see where our families branched off!  I have to say that I was just a wee bit jealous knowing that her relatives actually went to Kirtland and helped to build the temple there and my ancestors didn’t have the gospel until my grandmother Dorothy (above) accepted the gospel when my father was baptized and married my mother.

But I was also able to scan in this little gem:

These are my great grandparents, Dorothy’s parents.  I knew them for such a short while.  My great grandmother died when I was 11, and my great grandfather was killed in an automobile accident when I was 13.  Don’t you just LOVE his hair???!!  And the bow tie, so sheik!

My other scanning treasure, also a family history jewel.  I guess on my mother’s side, there is a coat of arms.  No kidding!  Kind of strange, I know.  But here it is:

I scanned it in straight, but when I color corrected it, for some reason, it slanted it.  So weird.  It didn’t seem to matter even if I tried to scan it in crooked.  That just made it worse.  My girl friend who is also apparently my cousin many, many times removed, said that each of those symbols on the coat of arms have a meaning.  So I started doing a little research.  Not everyone agrees on what the symbols mean, but I did find out that those little birds are called ‘Martlets’–footless sparrows, which are a symbol of the fourth son (mark of difference) that may signify one who has to subsist by virtue or merit, not inheritance.  Well, that’s nice to know, and still very, very true today.  Yep, that part fits.  The belt across the front is called a Fess.  It is a military belt or girdle of honor, representing readiness to serve the public.  That fits me too.

As far as the scrolly plant stuff??  No clue.  Don’t know about the helmet thingy either.  Or the three rings, or why there are three swallows…..

Any thoughts on your end?

Well, anyway, it is a cool thing. I am enjoying it and I can upload these things to Family Tree (as soon as I figure out that) and then someone who is related to me will have more information to work with.

Those are my ramblings about how fun Family History can be.  I really do enjoy it and I like finding things out about my family and the people who came before me and paved the way that I can enjoy the life I have.  I find it a particular and sacred honor to be able to go to the temple and perform eternal ordinances for them so they may have the blessings of the gospel, if they so wish.

That is the wonderful thing that I think some people do not understand.  Yes, we do perform ordinances for and in behalf of people who have left mortality.  However, we do not believe that because we have done that that the people whose work has been completed are now members of our church or our religion.  We believe that these ordinances are necessary for each and every person ever born.  However, we also believe each person has their agency.  If they do not want to accept the work that has been done for them, they do not have to accept it.  It is their choice.  On this side of mortality, we do not usually know if they accept it or not.  But we do the work, so it is available if they want it and are worthy of it.

So that’s a little bit different.  Anyway, now that I have rambled on and on, I may go scan some more stuff!  Have a great Memorial Day as we remember those who have gone before us and paved the way for us to enjoy the lives we do!

← The Lord is in the Details
Family First Friday (on Saturday) Busy, Busy, Busy #20 →