Well, I had super plans to have this blog post up and out early this morning.  I was just about to sit down and pow it out when my dear friend called.  I talked with her for an hour, which was awesome!  And then I started my work for the day and just kind of got into the groove and cleaned out my kitchen drawers today!  Yes, I did!  I even conquered the ‘gross drawer of DOOM’!!  (The one that the syrup spilled in after it overflowed boiling on the stove top.  And I was too frustrated and late to deal with it, so I left it there for six months.)  Yes, it was really gross!  And it took me about 45 minutes for that one drawer.  But guess what???!!!  IT is clean!  Then I glued the kitchen drawers that the faces are coming off of that have been driving me totally batty for about a year.  I fixed those too.  I am seriously on it today!!  (Most of it I think is due to my dear friend who helped me clean out a bunch of stuck emotions!  Thanks Diana!)

My major success of the day, however, was with one of my seminary students.  We took our new learning assessment today.  If you do not have a seminary student, or even know what one is, seminary is an early morning religion class for the high school aged teens.  This year we are studying Doctrine and Covenants and Church History.  Last year, the only requirement for getting credit for seminary was attending at least 75%.  This year, the church has chosen to “Elevate Learning” for our youth.  In order to get credit for seminary, now students still attend 75% or more, but they also have to pass 2 learning assessments in the year, read the book of study, and have a worthiness interview with their Bishop.  It is a lot more work than it was last year.  Students who want credit, really have to be willing to put in some effort.  I think the new requirements are amazing!  I think it will help all of us to grow and learn and show that we really know what the doctrines of our church are.

I learned a long time ago that if I wanted my youth (my own or those I was teaching) to achieve something, I needed to set the example of that for them.  Anything I want them to accomplish, I need to be willing to my effort on the line and do it right along with them.  So when I was called to seminary, I decided that I need to read all of the Doctrine and Covenants, like they are asked to.  I need to take the learning assessment, like they are asked to.  I need to memorize scripture mastery, just like they are asked to.  That is a lot of extra work for a mother of nine, even if four of those kiddos are out of the house.  I have been working on those goals, along with preparing my lessons to teach each day.  It is going to be a lot of work.  But I knew some of my students were at exactly the same place (the beginning) of doing those things even though I was coming in at the beginning of the 2nd semester.  I wanted them to reach and strive and be willing to try to complete the extra work in the shorter time.  What better way than to set that example for them, along with all of my other responsibilities.

Today, as we graded the assessment, we discussed the requirements for seminary credit.  With one of my students, I helped him to see that he had just passed the assessment, that he attended 75% or more, and that the worthiness interview wouldn’t be much of a challenge for him.  The only thing standing in his way of receiving credit for the year would be rather or not he chose to read the book.  I broke down for him the amount of reading he would need to do each day so he could accomplish that goal.  It wasn’t a lot, but it was significantly more than he had been doing.  It will take effort and time.  But for the first time since I have been teaching, he appeared open to the possibility.  I felt empowered!!  Whether he does it or not, he was open.  I reached in there and touched his heart!  That is a major success!!  And if he does read, and he does make the effort, then he wins too, because we all know the Lord will reward his efforts to be obedient and to try out the word!

We believe in agency, which is each person’s ability to choose—for right or wrong.  Forcing is never part of the plan.  Sometimes that is really hard when we are worried or we know they are making the wrong choice.  Sometimes we do have to step in, like when our toddler is playing in the street.  But each and every one of us is happier and more committed to the process, if the course we are following is due to our own choice.  In gospel learning, it has to be our own choice (The Lord will force no man to heaven–or the proverb, A man convinced against his will is of the same opinion still).  Gospel learning only sinks in and takes hold if it is done by choice.  The trick then, becomes how to help the other person see and desire to experiment for themselves, the merits of the gospel plan.  If they are unwilling to put forth the effort initially, or if they are not consistent in the exercise of their faith, or if they falter along the way, those seeds of faith either won’t grow, or will quit growing.

One of the experiments we have been doing in seminary illustrates this.  I brought in some seriously dead houseplants.  (I was worried they were beyond saving).  But I felt the need to bring them in.

We started watering them.  Nothing much happened the first three weeks.  Then something amazing happened.  Green shoots started to appear from the dirt. 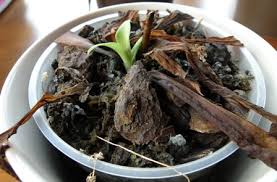 I trimmed back all of the dead stuff and kept watering them.  They are still tiny, but they are green and alive and growing.  It will still take a lot of time and effort and attention, but those plants can one day be bigger and more than they were before I killed them.

Our testimonies are like that.  They may wilt, or wither or die.  But if we choose to water those faith plants, through small and simple actions, like prayer, reading our scriptures, attending church, small, simple, steady—those faith plants will grow again.  They will return.  And with continued effort and time and care, those plants and that testimony will one day be bigger than it was on the day we stopped feeding it.

I think today, I motivated one of my students to be willing to make that effort for himself.  I certainly hope he does so.  Because I personally know the blessings that will come to him as he makes that continued effort over time.  The Lord has an amazing spiritual feast just waiting for him if he will just choose to make the effort and then to continue to do so.

We will be celebrating by eating a lot of Pie 🙂

← Slaying our own dragons.
Family First Friday #10 2015–Sharing our beliefs →