I had this great blog post planned for today!  Then life has hit me and I am swimming in toddler underwear and urine.  Sweet!  My favorite!  So in lieu of something uplifting, I will just recount the adventures we have been having at our house.

So Spike, Spike has been able to use the toilet since he was about 2 and 1/2, an entire year ago.  Last year, during the Christmas holidays, I spent some of his money on training pants.  I thought we were totally ready to go.  They sat there, and sat there and sat there for an entire year!  Once in a while, I would bring them up and ask Spike if he would like to try them out.  The answer was always the same, “No, not right now, maybe another day.”  Then I would wait for weeks or months and then ask him again.  And that is how it went for the last year.

Finally, now that he is 3 and 1/2 and Primary Sunbeams class is happening in January, I thought, good grief. It is time to get this show on the road!  I thought maybe I was handling him wrong.  After raising 8 toddlers, I thought I knew what I was doing and pretty much had a handle on this whole potty training thingy.  Well, Smiley was not a willing potty trainer either.  I learned with him, that the ‘wait until they’re ready’ method, doesn’t work with every single child.  It is good for most, and necessary for all (in that if you push them too hard, you will make the problem worse).   This isn’t about potty training the parents, it is potty training the child.

When I convinced Smiley that wearing underwear would be cool and that he could hold his urine until he was ready to put it into the toilet and that way keep his pants dry, he took me literally (which his personality is prone to do…….but he was so little that I didn’t know it then).  He literally held his urine the entire day!  He put on the underwear in the morning after his wet diaper and kept them dry until 8 p.m. that night.  The kid would not use the toilet and he did not wet his pants.  I was worried we were going to have to take him to the emergency room before he ruptured his bladder.  Well, as I explained the situation to my husband, Drew said, he is just going to have to go.  And then Drew sat him on the toddler toilet and held him there until he would go.  Smiley screamed and screamed and screamed, beads of sweat were rolling down of his head, and started kicking because he was so upset.  He finally lost all control and urine went everywhere!  It was awful!!  But, that was all he needed.  From then on, Smiley used the toilet and potty training was a breeze from there on out.  But that first day, good grief!!  What a day!

As I pondered Smiley’s experiences and thought about Spike’s personality, I realized he hates change, fights change, but once it happens, he manages.  Wearing underwear is a change.  So yesterday, I fought through it.  I had been prepping him for three days.  I told him when the package of diapers we were using ran out, we were not going to wear them anymore.  I made him try on his underwear once a day.  He could pull it right back off, but I strongly encouraged him to (and didn’t let him get out of) putting them on his body.  The morning the diaper package ran out, I told him it was time to wear them.  He refused.  He refused to let me change his diaper.  So I told him that when the diaper got so full that it leaked, it was coming off and then we were wearing underwear.  Period.  No exceptions.  I went about my day. 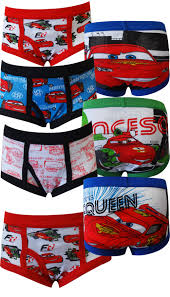 About 2 hours later, the moment was upon us.  He had a bowel movement and it was everywhere.  The day before, he had one that didn’t get changed right away and made him sore.  I reminded him that if I didn’t get it off his rear end, it was going to be sore and hurt.  He let me take it off and clean him.  Then I told him it was time to wear underwear.  I had brought them all out earlier in the morning when I tried to put them on him.  I told him to choose his pair.  He refused and screamed for his diaper.  I refused and told him that I would be happy to put him in underwear but if that is not what he wanted, he would just have to be naked.  That went on for half an hour with him yelling at me to put a diaper on him, and me quietly repeating that I would not put a diaper on him but would be happy to put underwear on him.

Then I had a stroke of genius.  It was probably the Spirit helping me to motivate my child.  But the last two weeks, Spike has gone grocery shopping with me and I have gotten him a Churro from Costco for behaving well while we are shopping.  It was grocery shopping day.  I told him that I needed to go to the grocery store, but unless he was wearing pants and underwear, he would not be able to go with me.  I would have to just get  a churro by myself.  Since it was raining, he would have to have underwear and pants, and socks and shoes and a sweater.  Oh well.  I guess I’ll just go by myself.  That did the trick.  He was willing to put on his underwear and pants.

Before we left for shopping, I took him into the bathroom and asked him to use the toilet so we could go shopping without an accident.  He did!  I packed a bag for him in case we had an accident while shopping.  We finished our shopping, churro in hand, and went and picked his brothers up from school and got home all without incident.  Then I took him to the bathroom at home.  It was a super successful day, just because he was willing to wear underwear (even though we went through five pair)!!!  It was a miracle!

He even wore them to bed!!  I just took him to the toilet before bed and again when he woke up.  At this point, I have to take him to the toilet.  He is not willing to decide for himself and take himself there.  But this is all in the process right?  We rejoice in the little steps and congratulate heavily, the small steps!!  At this point, we had tried all of my potty training tricks that worked with the other children.  None were working with Spike.  He is not the other children.  He needed a different routine and different motivations and different rewards.  It is just not the normal stuff and he is exhausting!

Each trip to the toilet is a battle of the wills and an exercise in diplomacy.  (And because he loves to drink water, today I have to set the timer to take him to the toilet, or I forget and he has an accident.)  Wish me luck!! Maybe by the end of the Thanksgiving Holiday, Spike will have this whole toilet training thing mastered!!  (And I will have survived my most difficult child to date!)

← Why I love small town living!
One person’s light. →